Dr Malcolm Appleby MBE is known primarily as an engraver and he is considered to be one of the most original and highly skilled craftsmen working in Britain today. His prolific output ranges from sculptural table pieces to small silver buttons and is an exemplary example of the British craftsmanship LINLEY champion.

As a boy, David Linley would visit Malcolm’s atelier in Perthshire with his grandmother, Queen Elizabeth The Queen Mother, and later in his teens, he was fortunate to be taught by him at Bedales School. 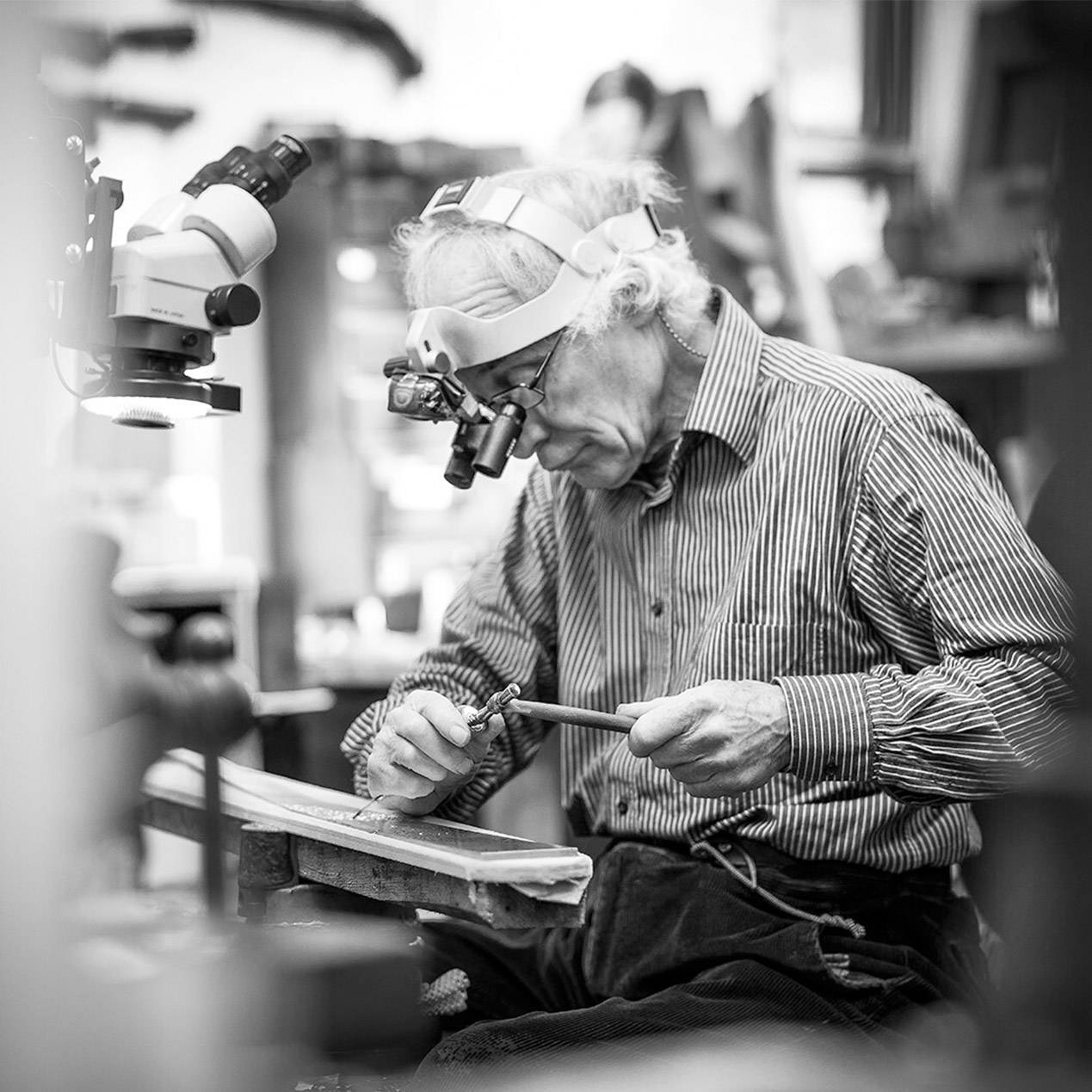 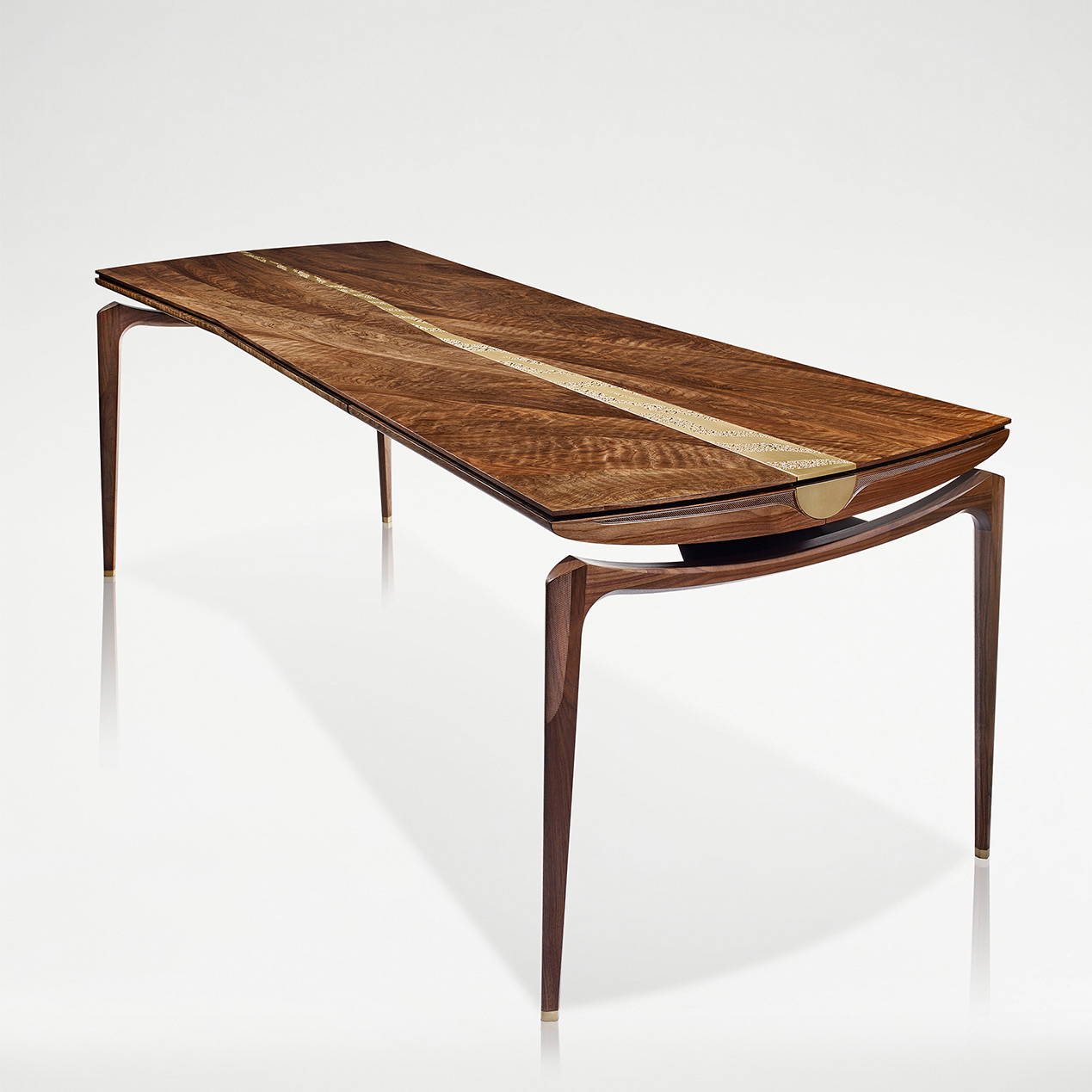 2017 saw David and Malcolm collaborate for the first time to create the Fulbeck Desk as part of LINLEY’s 2017 Masterpiece collection. Designed with the modern LINLEY client in mind, the Fulbeck Desk is a departure from the traditional pedestal desk, blending together traditional and digital luxury.

Running down the centre of the desk is a striking brushed brass plate, intricately hand-engraved by Malcolm who is known for his imaginative use of line and form. 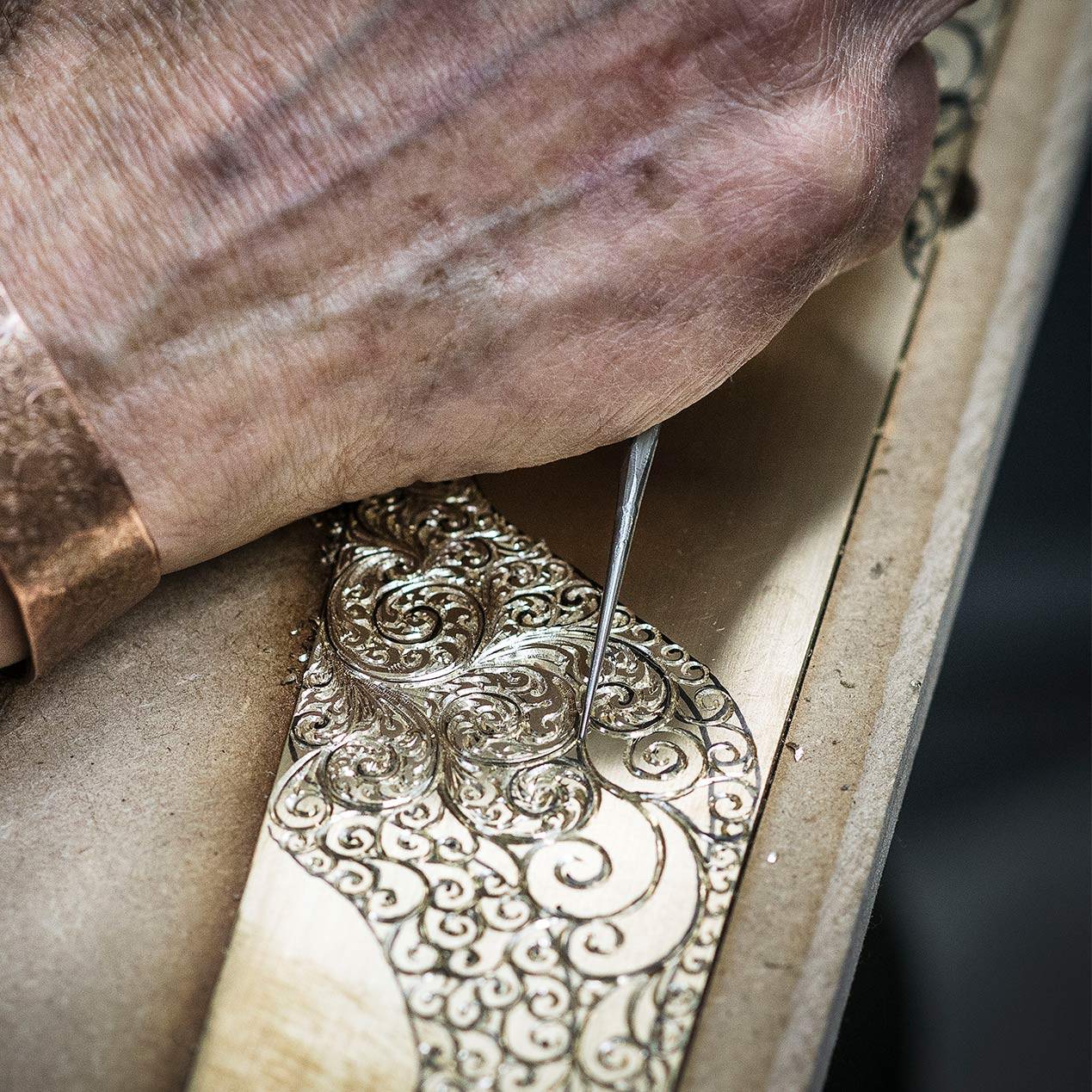 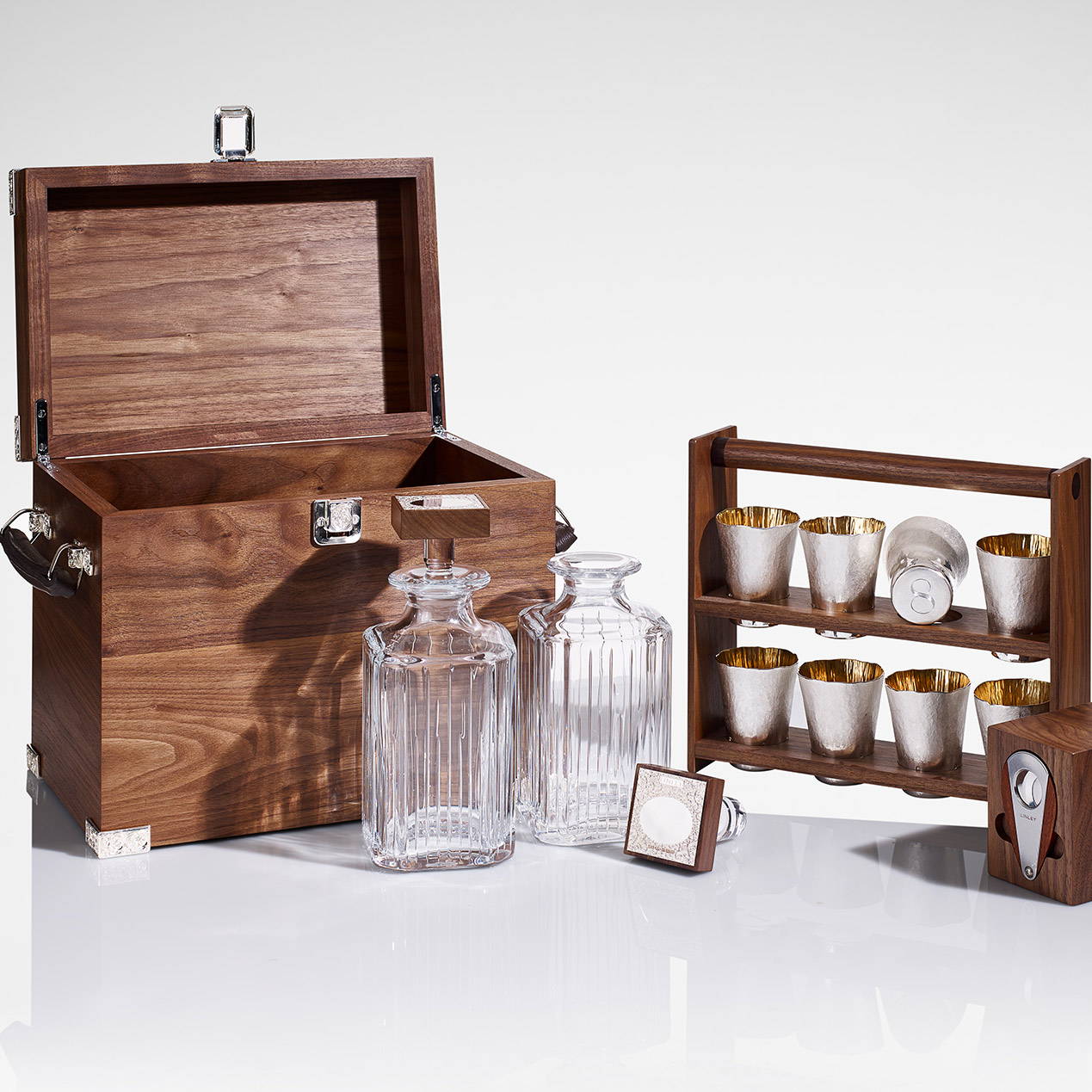 LINLEY and Malcolm collaborated once again to create this striking feat of design. celebrating Britain’s sporting and craftsmanship heritage, the Malcolm Applebly Shooting Companion is a one-of-a-kind take on the classic LINLEY Shooting Companion.

From his fine jewellery creations to the intricate shotgun engravings, experimentation adds an element of the adventurer to Malcolm’s work.

Inside the box is a walnut rack and eight, solid silver hammered cups with hand-poured 24kt gold plating to the interior. Two lead crystal LINLEY Trafalgar Decanters are each fitted with a hand- engraved solid silver hallmarked plaque with space for personalised engraving. A cigar cutter, wool blanket and compartment to hold 8 cigars are also included. 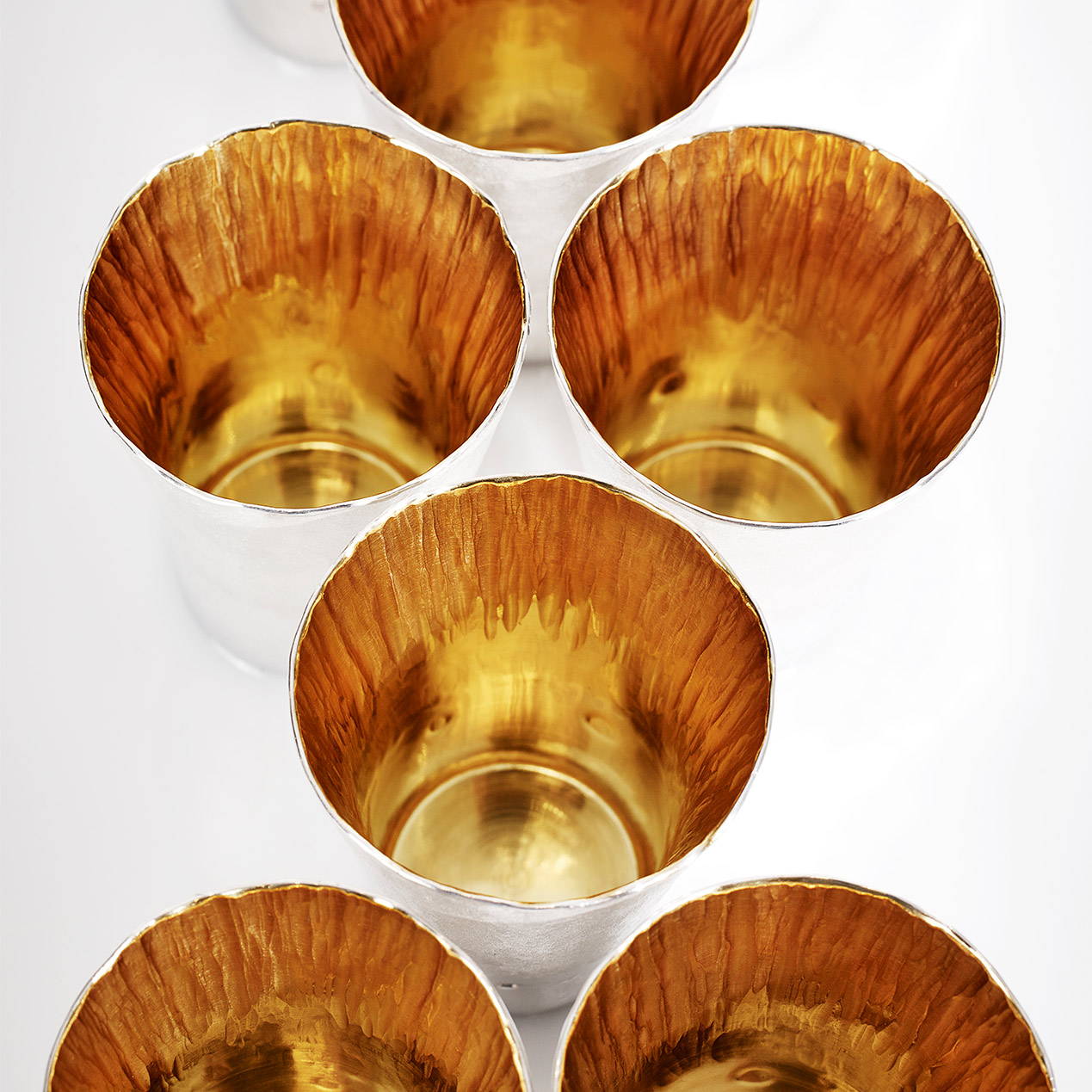 Our Interior Design team are based in our Belgravia head office and would be delighted to discuss your project with you.

Always up for new challenges, we can provide everything a room might require including antiques and art and can source any item that’s not part of the LINLEY brand from our extensive network of craftsmen and supplies.

WHAT MAKES US UNIQUE